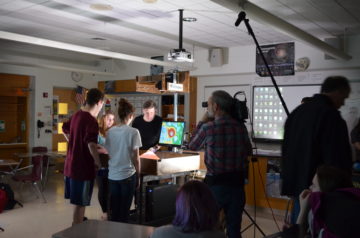 An “augmented reality sandbox” created by Perkiomen Valley High School earth science and physics teacher Tom Lavanga is the subject of a segment for the “Xploration Earth 2050” television show.

An “Xploration Earth 2050” film crew visited the Montgomery County high school in March 2016 for a show that aired on Fox affiliates on Sept. 17, 2016. The crew interviewed Lavanga and his students about the sandbox and how it is used in classes to reinforce lessons having to do with hydrographic flow, topography, watersheds, catchment areas, levees and other geographic, geologic and hydrologic concepts.

The sandbox is an elevated table filled with sand that is connected to an infrared camera, which projects colors onto the sand that change and shift as the sand is moved around. The sand in the box ends up looking like a topographic map that shows contour lines to depict elevation. The camera measures changes in the depth of the sand as it is moved around, sends those measurements to a computer program that then processes the data and sends it back to the projector and the computer monitor to reflect the changes in the sand’s movement. In addition to reflecting the contour lines of the sand, the camera and computer are able to simulate water movement using Navier-Stokes equations to calculate the flow.

Lavanga created the sandbox after seeing one in use at Fairmount Water Works, and learned that the code to interpret the changes in sand was made public by a University of California Davis professor. “I loved it just as much as my kids did, so I thought it would be fun to build one and use one in our classrooms,” he said.

He has been putting it to use this school year in his earth science classes. The sandbox can also be used to demonstrate rainfall, floods, volcanoes, and has applications for physics classes as well, since it can show wave properties and behaviors when an object is placed in the simulated water.

“Xploration Earth 2050” producers discovered Lavanga and the sandbox at the Young Innovators Fair held in the Oaks Convention Center in January. They did a brief interview with Lavanga’s students there and were so impressed by the sandbox that they wanted to feature it on the television show. “Xploration Earth 2050” airs on Fox stations on weekends and is meant to introduce viewers to products, concepts and technology of the future.