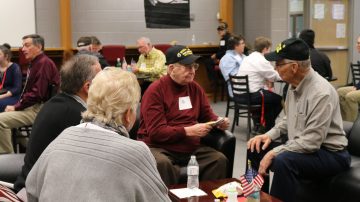 Pequea Valley hosted local veterans in a new program honoring Veterans Day. The program began with a luncheon for the veterans and their families, with the Pequea Valley Bugle Corps calling for the “mess hall” and another bugle call to “assembly.” Following the luncheon was an all-school assembly in which  individual veterans were recognized for their service. The assembly included fife and drum corps, speeches, a concert band performance of The Marches of the Armed Forces Medley and bugle corps performance of “Taps.” Student council President Tre Rosa introduced each veteran by sharing their name, branch of service, rank and years of service. Together, the veterans represented 209 years of service and four of the five military branches, having served in Vietnam, Korea, the Gulf War, Afghanistan, Iraq and WWII. After the assembly learners enjoyed visiting the D&L Bensinger restored WWII military vehicles, creating “dog tag” thank-you cards, hearing from a Vietnam veteran panel, as well as a small group Q&A session with one of the visiting veterans. Staff and learners found the day to be moving and meaningful.