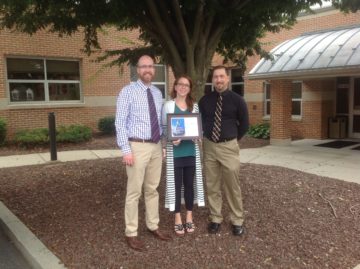 Pequea Valley High School was awarded the Golden Globe for 2017-18. This makes it one of only 17 school districts in Pennsylvania to earn the award and one of only four new recipients for the highest level of acknowledgement. The Pequea Valley World Language Department began working on updating its program in the spring of 2015 with the development of a new curriculum model that offers students a variety of specialized courses after 2 years of instruction. In the fall of 2015, the department rolled out two new courses, German/Spanish Language & Society (a culture course) and German/Spanish Film & Media. This was followed a year later with the roll-out of three additional courses, German/Spanish Conversation, German/Spanish Language & Literature, and AP German/Spanish. Additionally, in the 2016-17 school year, the WL department began a new proficiency-based assessment program that gives students nationally-recognized proficiency ratings for their language skills. The department will continue to work on refining the curriculum, implementing proficiency-based assessments, and expanding special program features in the years to come.