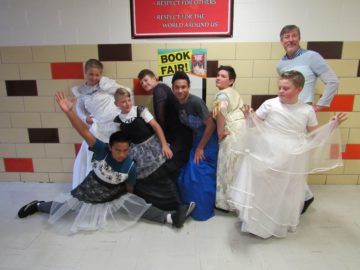 As a baby only 9 days old, Julia was airlifted from Lancaster General Hospital to Penn State Children’s Hospital, Hershey, with multiple heart problems. Julia underwent her first heart surgery at 16 days old, and at 5 1/2 months of age, had her second heart surgery. In January 2017, Julia had a pacemaker implanted during surgery in the new state-of-the-art Children’s Hospital. Throughout her numerous hospital stays, much of the sophisticated equipment used carried plaques noting the items were purchased with funds raised by Children’s Miracle Network.

To raise money in Julia’s name students started the Penny War, which pitted girls against boys. Each group had a jar to collect coins, with pennies added as positive numbers, while dimes, quarters and dollars or any kind of bill were subtracted as negative numbers. The objective was to put as many pennies in your gender’s jar while putting silver in the other gender’s jar to sabotage them and deduct the most points possible. If the guys win, 6 brave girl volunteers will have their makeup done by the guys for the day. If the girls win, 6 brave boy volunteers will have to wear a dress from the costume closet for the day! Along with the funds raised from a district-wide dress down day, Pequea Valley presented the Children’s Miracle Network with a check totaling $770.