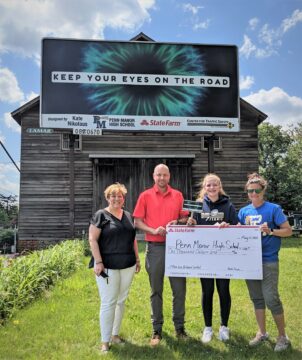 A billboard designed by a Penn Manor High School student urging drivers to stay alert was unveiled Tuesday, May 17, along Route 462, near Donnerville Road. Sophomore Kate Nikolaus designed the billboard as part of the “No Excuses Youth Traffic Safety Billboard Design Contest,” sponsored by State Farm Insurance and the Center for Traffic Safety.

Kate’s winning design includes a bright, stylized image of an iris, with the message “Keep your eyes on the road” running across the frame. The image is taken from a photograph of Kate’s own eye. Two other Penn Manor students, Kyle Sullenberger and Travis Clawson, placed second in the contest. Their design depicts a driver’s view through the windshield, showing one hand on the steering wheel and the other holding a cellphone with the message “Put it DOWN so families don’t FROWN!!” In the upper right of the frame is the message “Be the change!”

The “No Excuses Youth Traffic Safety” contest was open to students in Lancaster, Lebanon, Adams and York counties.

Kate, Kyle and Travis created their designs under the guidance of Jenn Forney, a physical education and health teacher at Penn Manor High School.