‘Paying it forward’ a mindset for coach Maney, wrestling team 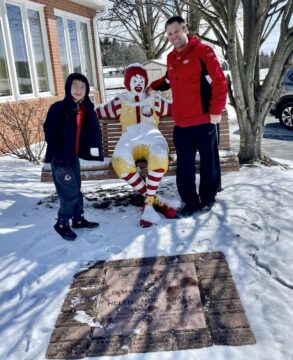 For Bellefonte Area High School teacher and wrestling coach Mike Maney, Ronald McDonald House Charities hits home. It’s something he and his family used several times – saving the family money and being able to put their sole focus on the health of their children. That’s why Maney and the wrestling team are so invested in giving back to the same organization that helps so many people like Maney. About $1,000 has been raised in the five years since they started collecting can tabs – that later turn into money for the charity.

A majority of the can tabs are collected in the attendance office at the high school or at wrestling events.

“Vicki Confer, the attendance secretary at the high school, had been collecting them for a while, and after talking to her we decided to work collaboratively on the project,” he said. “Due to COVID, we had to limit the donations for a few years back, but picked it back up this year.”

And being a part of something beyond athletics is something Maney said is important to his team. Inspired by a mindset that “a coach can impact a player, a player can impact a team, a team can impact a school and a school can impact the community,” Maney said he and his team are often looking for ways to pay it forward.

“Basically, it is a chain reaction,” he said. “At the end of the day, it isn’t what you have or what you accomplished, it’s about who you lifted up, who you made better and what you have given back. … You need to use your platform for the positive and not waste it. Be forever grateful for the opportunity to play the sport, but most importantly, use it to make others around you better.”