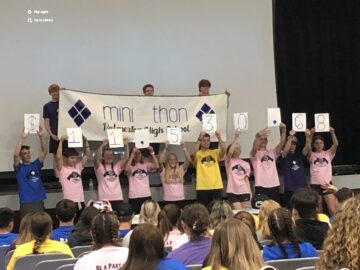 Palmerton Area High School (PAHS) teamed up with Four Diamonds to host their second mini-THON event in April, and it was a huge success! This event brought awareness and raised money for pediatric cancer. Students attended the event from 10:00 p.m. on April 23 through 6:00 a.m. the next morning.

The planning for this event started in December 2021 and continued up until the night of the event. PAHS Student Council co-advisors, Ms. Jeana Baumgardt and Mr. Joshua Nenscel, along with the club’s four student officers sat down and mapped out exactly what they wanted from the event. This included fundraising opportunities, food/drinks, decorations, and all other mini-THON activities. The Student Council officers, Kyle Sebelin, Elizabeth Morgan, Justin Sebelin and Erin Kistler, really stepped up to plan and coordinate a great night.

The event started with a registration period and the setup of the donor drive account. There were 220 students who registered for the event. The registration fee included a mini-THON T-shirt for the night and a donation to Four Diamonds. After the registration period ended, Student Council coordinated two main fundraising events, which were called “Stall” and “Minute to Win It.” Student Council members assisted with these events to make them both very successful. For the Stall event, students brought in all their spare change for three days to their Block 2 classroom. On the Friday of that week, teachers stalled their Block 2 teaching until they counted all the spare change that was collected throughout the week. This event raised over $700. The Minute to Win It fundraiser, which took place at a wrestling match and basketball game, consisted of a minute-long race to collect as much money as possible to raise awareness for pediatric cancer. The crowds of both the home and away teams really came through, and the event was able to raise over $600.

In the upcoming months, the planning phase shifted to the actual mini-THON event. The Student Council officers and advisors met and planned out the night’s activities. They included games throughout the school, planned relay races, a glow stick dance party, and homemade French toast for breakfast.

Ms. Baumgardt expressed, “The community and parents supplied most of the food and drinks for the mini-THON night, which was a huge help for student council. It really maximized the amount we were able to donate to a great cause.”

Student council president Kyle Sebelin stated, “Everyone came together for a great cause, and it was an amazing, memorable night.”