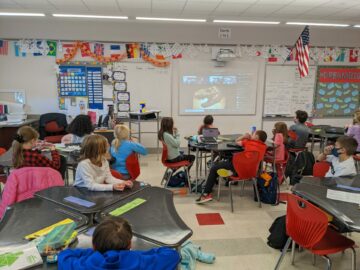 One of the benefits of virtual presentations is being able to connect students with people in different parts of the world, such as connecting students in Horsham with a paleontologist in London, England. Thanks to technology, Dr. Imran Rahman, a principal researcher and paleontologist at the Natural History Museum in London, England, virtually presented to third grade classes at Hallowell Elementary School on January 21.

Third grade teacher Mark Crow is a friend of Dr. Rahman and reached out last school year when he was teaching virtually in the Hatter Academy.

“Technology has the potential to expand the boundaries of the classroom and bring in experts from different fields to the benefit of our learners,” said Crow.

Dr. Rahman’s presentation was a great highlight of the 2020-21 year, so he wanted to bring Dr. Rahman back virtually to present to his students again this year. As a child, Dr. Rahman loved dinosaurs, visiting museums and meeting scientists, which all led him to pursue his career as a paleontologist. He told students about his work at the Natural History Museum, including new techniques to study fossils such as CT scanning and creating 3D models of fossils.

“As part of this science work, students are making their own fossils using shells, clay and plaster of paris,” said Crow. “We have also been learning about different types of rocks and learned that fossils are usually found in sedimentary rocks.”

During the program, students were engaged and asked thoughtful questions. They were very interested in the types of fossils Dr. Rahman has found, including the oldest and his favorites.
“I hope students learned that if they work hard and pursue their passions they may be able to make a career around something they are really interested in and consider a career in the STEM fields,” said Crow.