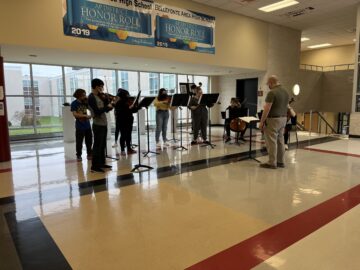 The sound of music could be heard at Bellefonte Area High School this spring as student members of string orchestra, led by Orchestra Director Anthony Fortuna, played recordings of various tunes for their early spring performance.

Fortuna said he gathered his orchestra musicians together as part of an initiative called, “Music in our School.” Selections included:

-The “Batman” theme song
-Richard Meyer’s “Rosin-Eating Zombies from Outer Space”
-“Candle on the Water,” from Disney’s Pete’s Dragon
-Rossini’s Overture to “The Barber of Seville”
-A medley of music from Charlie and the Chocolate Factory; Richard Meyer’s “Acrobats;” “Funky and the Bass Cats,” by Anne Svedsen; and the main theme song from Star Wars.

“The students and I wanted to find a fun, fresh and new way to present an orchestra performance,” Fortuna said. “Together we brainstormed and came up with the idea of doing a filmed orchestra performance that included theatrical acts inspired by the music being played.”