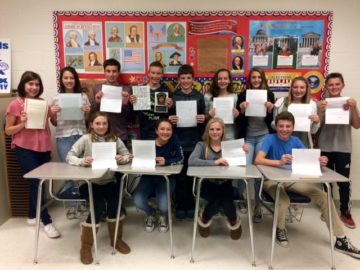 In early October, eighth-grade students in Mrs. Nigrini’s American Foundations classes at Oley Valley Middle School were invited to write a supportive letter to a soldier who was currently deployed overseas. These letters were to be distributed to international military men and women stationed at Camp Bondsteel in Kosovo who were there on a peacekeeping mission. Lt. Col. Michael Wegsheider, father of two Oley Valley SD (OVSD) students, kindly facilitated the letter exchange. Students were hopeful for return correspondence, but knew that they were not guaranteed a letter in return. It felt like Christmas morning when, in late November and early December, students began to receive letters and care packages from some of the soldiers under Lt. Col. Wegsheider’s command! He has since returned to the United States safely. OVSD is grateful for his willingness to help with this valuable learning experience.