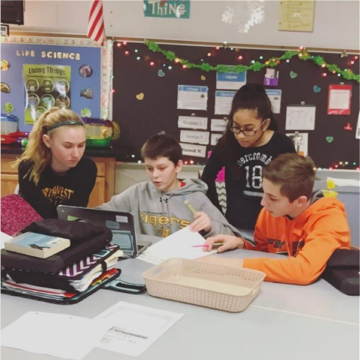 Students working on their breakoutEDU competition

To review classification and taxonomy skills, seventh-grade students in the Northwestern Lehigh SD completed a BreakoutEDU in competing groups. Each BreakoutEDU kit had a series of puzzles and tasks that they had to complete in order to break open a digital lock on a Google form. The Google form had five locks, some with word codes and some with numerical codes. In all of the locks, students had to use some type of skill that they learned in this unit, for example, solving a dichotomous key or listing the levels of classification, to find the key. Every group had fun and showed an intense level of competition as well as exceptional teamwork. Some of the topics covered in the codes for the BreakoutEDU included levels of classification, dichotomous keys, diagrams, and scientific names. The activity is interactive, kinesthetic and includes higher-level thinking. Seventh-grade teacher Samantha Ward said students had so much fun working together and competing, they hardly realized they were directly utilizing important skills on which they will be tested.