It’s all Greek to me 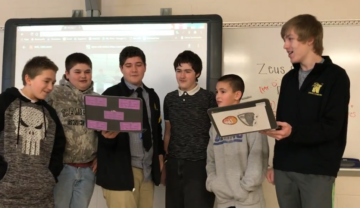 Seventh-graders at Northwestern Lehigh Middle School explored Greek culture and history. Students were divided into city-state groups, and worked to learn more about the geography, religion, government and contributions of the ancient Greeks. During this unit, students competed in various events and activities. They earned points that contributed to their city-state score. The unit culminated with students participating in the Greek Olympics! The city-state that earned the most points from all of these activities combined was the ultimate winner. To start the study, and for students to learn more about their new identity, they researched information about their city-state and used that information to create a chant. The chants had to depict the important cultural elements of the city-state and were recited several times throughout the unit to display city-state pride. Collaboration was key in this simulation of ancient Greece. The videos at the link below depict the students’ first attempt at their chants https://goo.gl/photos/sbxd5qhkya2Hk8UTA