North Penn pledges to ‘Spread the Word to End the Word’ 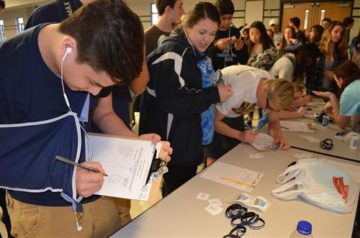 Students signing the Spread the word to end the Word pledge

Students and staff in the North Penn School District pledged to show respect by celebrating a nationwide campaign supported by Special Olympics and Best Buddies on March 1, which is designated as a national awareness day to “Spread the Word to End the [R] Word.” The R-word is the word “retard(ed),” which is offensive and derogatory.” The Spread-the-Word movement was established at the Global Youth Activation Summit during the 2009 Special Olympics Winter Games, and was created by youth with and without intellectual disabilities.

On March 1, staff at Gwynedd Square Elementary School, North Penn High School and the Educational Services Center celebrated the national awareness day by wearing t-shirts emblazoned with “North Penn Pledges to Show Respect.” At the high school, student Greg Gilrain set up a “pledge station” in the cafeteria where students could take the pledge to support the elimination of the derogatory use of the R-Word from everyday speech and promote the acceptance and inclusion of people with intellectual disabilities. In all, 964 students and staff took the pledge at NPHS. Gilrain, who serves as the Montgomery Co. president of the R-Word, said, “Seeing my older brother go through many challenges with his intellectual disability made me want to do more to get him involved as much as possible.” Greg hopes that next year, the program will spread throughout all 18 of the district’s schools as well as all areas of Montgomery Co.