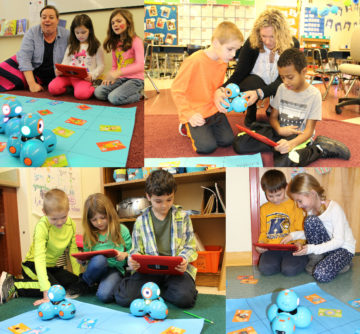 Highcliff Elementary students use their coding skills to move their Dash and Dot robots in a math skills game.

Coding and computer science lessons are starting early at North Hills School District thanks to a new pilot program at Highcliff Elementary. Highcliff Principal Kristy Bilderback and her staff are using 20 “Dash” and “Dot” robots along with 10 iPads to teach lessons that focus on coding and computer programming but also reinforce math skills and life skills such as communication, teamwork and problem-solving in our youngest learners. All Highcliff kindergartners, first-graders and second-graders, and at least one class in grades 3-6, are taking part in two to three lessons with the blue, wheeled robots this school year. Students first learn how to code and then how to control the robots through iPad apps by using their coding knowledge. The students program the robots to play a math game or navigate a maze they create. Learning computer science components such as coding at an early age allows students to gain a more in-depth understanding of both the logic and advanced thinking behind computer programming. By pairing the robots with iPads, the district is encouraging students to seek to understand and be able to alter and impact the digital environment that is all around them.