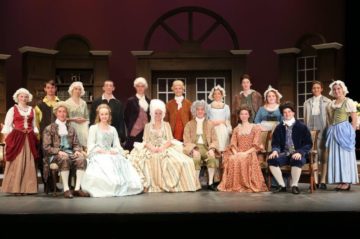 The cast of the 2016 fall show, She Stoops to Conquer

North Penn School District (NPSD) is proud to announce that the North Penn High School (NPHS) Theatre Department’s fall show, She Stoops to Conquer, has been selected as one of six shows to be performed on the Kimball Main Stage during the International Thespian Festival in mid-June in Lincoln, NE. This past fall, She Stoops to Conquer was not only presented in the NPHS auditorium, but also traveled to the Pennsylvania State Thespian Conference at Central York High School where it was performed to much acclaim on the evening of Dec. 2 for over 1,000 festival delegates and their directors from across the state. That performance was also adjudicated by representatives from the Educational Theatre Association (EdTA), parent to the International Thespian Society, as one of at least 45 other productions from the United States and Canada for an invitation to perform at the International Thespian Festival at the University of Nebraska, Lincoln in June 2017. On Dec. 22, Andrea Roney, NPHS Theatre director and Thespian Troupe advisor, received a congratulatory invitation from Nancy Brown, festival director, that NPHS had been selected as one of six shows to be performed on the Kimball Main Stage during the International Thespian Festival. While this was a distinguished honor in and of itself, EdTA is still adjudicating shows through the beginning of February. Their selection board decided that She Stoops to Conquer was worthy of selection to one of the six slots even before reviewing other potential productions. “I am tremendously proud of all the young men and women who worked tirelessly backstage and onstage to make this production achieve such a high level of recognition,” said Roney. Added to this accomplishment was the fact that three actors in the show had to step into other roles just eight days prior to opening night when one of the main actors suffered a serious injury from which he is recovering. “It is a testament to their talents, tenacity, passion and dedication. I am thrilled that they have – as a complete ensemble – ‘conquered’ She Stoops!” Roney explained. According to Roney, the production has been a huge challenge and ultimately a labor of love for all involved. In early December, NPHS Senior Catherine Winner who plays the character Kate Hardcastle said, “I really hope we get selected. I’m not done with Kate yet. I’m just beginning to understand and play her.” This is true for the entire cast and crew. Roney is most thankful that they will continue their educational journey as young artists as the group continues to work on the production through the spring. For more information about the NPHS Theatre Program, please visit www.npenn.org/theatre.