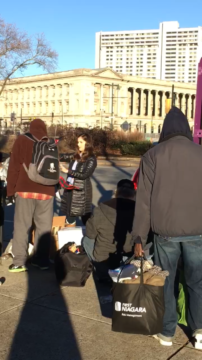 Madeline Payne handing out supplies to the homeless in Philadelphia.

The North Penn School District (NPSD) is proud to recognize North Penn High School (NPHS) senior Madeline Payne for being named the 2017 Montgomery County Youth Hero by the American Red Cross. The award honors individuals who truly exhibit the spirit of humanitarianism by showing courage, kindness and unselfish character through their acts of heroism in our community. It is presented by the Montgomery County Leadership Council, a group of local professionals who volunteer to raise funds and awareness for the American Red Cross Southeastern Pennsylvania. There are seven categories in which award recipients can be nominated, including Good Samaritan, First Responders, Give Life, Community Partner and Youth Hero. Photo of Madeline Payne distributing items to homeless in Philadelphia Madeline is a senior at NPHS and serves as Vice President of the NPHS Key Club. She was nominated in the fall by Key Club Advisor, Linda Law, in the “Youth Hero” category for her work with the homeless in Philadelphia. In 2014 when Payne was just a sophomore at North Penn, she began to notice a need for aid for homeless people in the Philadelphia area and felt compelled to do something about it. In December 2014, Payne personally purchased winter essential items and assembled them in bags decorated with inspirational messages. On Christmas Day, she traveled to Love Park in Philadelphia to hand the bags out to homeless people who gather there. “I distributed a variety of simple and cheap items,” she explained. “I didn’t anticipate the large number of people in need, so I was only able to aid of small percentage of the people there that day at Love Park.” Payne left the city that day inspired and determined to gather more supplies for those in need, so she decided to bring her idea to NPHS where she knew she would be able to gather items on a much larger scale. At the start of the 2015-16 school year, Payne presented her project to NPHS Principal Todd Bauer who was happy to support the drive. With the help of the NPHS Key Club, the school was able to collect over 500 items for the homeless that Payne once again personally distributed on Christmas morning at Love Park to many grateful people. “This year, as a senior and vice president of the NPHS Key Club, I am aiming to make the drive even bigger,” Payne said at the beginning of the 2016-17 school year. The NPHS Key Club partnered with two other school clubs including the National Honor Society and the Career and Community Leaders of America to gather items for the 2016 drive. More than 1,000 items were gathered and distributed to those in need on Christmas morning. Payne was selected in December 2016 along with three other deserving individuals as the 2017 class of Montgomery Heroes who will be honored at a breakfast later in the spring.