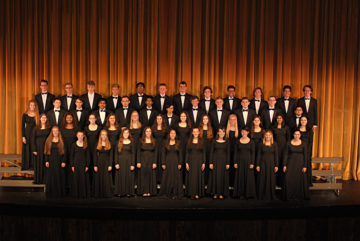 Thanks to the votes of students, staff and the North Penn community, the North Penn High School (NPHS) Chamber Singers were named the grand prize winners in Division II of 101.1 More FM’s Eighth Annual Christmas Choir Competition. The NPHS Chamber Singers were selected by the station as one of nine Division II semi-finalist choirs to be featured in the competition. The Christmas Choir Competition invites school choirs of students in grades K-8 (Division I) and grades 9-12 (Division II) to submit a recording of a holiday-themed musical performance during the months of October and November. From there, the station selects nine semi-finalists from each division to compete for the grand prize. The Chamber Singers vied against the Cherry Hill East HS Holiday Singers and the Ridley HS Rhapsody Choir on Tuesday, Dec. 6 in the semi-final round of the competition. The North Penn community banded together and voted North Penn through to the final round on Thursday, Dec. 9 where they battled Monday’s winner, the Council Rock North HS North Voice Choir and Wednesday’s winner, the Council Rock South HS Vocal Ensemble for the grand prize. Thanks to students, staff and the North Penn community, the NPHS Chamber Singers were announced as the grand prize winner for Division II on Dec. 9 during the 101.1 More FM morning show with Jenn Ryan and Bill Tafrow. As the grand prize winner of the competition, the NPHS Chamber Singers will receive a $5,000 cash prize and an opportunity to perform with The Philly Pops at the Kimmel Center in Philadelphia on Dec. 14. Congratulations to the singers and Matt Klenk, director of the group of 50 students in grades 10-12, for this well-deserved honor. To listen to the NPHS Chamber Singers’ song entry and to learn more, click here: http://www.morefmphilly.com/2016-finalists/.