No Place for Hate at Meyersdale 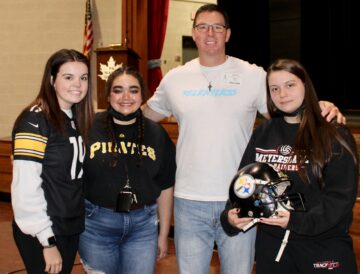 Members of the No Place for Hate Club at Meyersdale Area Middle and High School welcomed guest speaker Terry O’Shea on April 11. O’Shea is a former professional football player and spoke to students, in grades six through 12, about the need for perseverance and acceptance. Members of the club include Laurel Daniels, Chaddea Shoemaker and Linzee Emerick.

The Meyersdale Area School District welcomed a special guest on April 11 as part of their efforts to make MASD a more inclusive and accepting environment for all students. Terry O’Shea, a former Pittsburgh Steeler, was the guest speaker for the No Place for Hate Club. No Place for Hate is a student-led organization created and implemented to help teach love, understanding, respect and acceptance for all students in the Meyersdale Area School District. With the assistance of History teacher Michael Swank, O’Shea was contacted and agreed to speak to students in grades six through 12 about the need for perseverance, acceptance and courage in order to succeed and thrive in life.

O’Shea is a former professional football player who was a tight end in the National Football League and the World League of American Football. He spent time playing for both the Pittsburgh Steelers and the Barcelona Dragons. Mr. O’Shea also played collegiately at California University of Pennsylvania. Since that time, he has traveled as a motivational speaker to help groups of people overcome obstacles and succeed.

O’Shea shared stories of his own life and how challenges he once thought impossible were the building blocks for his future success. “I believe everyone deserves the best opportunities in life,” he told students. “We all have the opportunity to do the best we can each day and make a difference. It is not ever easy being the one to stand up for what you believe, but each one of you can do that. That’s your job, make and be the change. Look in the mirror and know that is what you are here to do and do it.”

O’Shea reminded students of the need to make connections, real connections to break through barriers created by what makes each of us special and unique. “There are obvious differences in each of us; race, religion, gender, popularity, intelligence, but these differences can only separate us if we let them,” he explained. ”Silence separates us. Break that silence, stop and say hello, get to know new people and different people and break that silence and break open opportunities to find what can bring us together.”

O’Shea encouraged students to remain true to themselves and go out into the world to effect change. “Don’t look at what’s in front of you, look to the horizon. You all have a positive future if you stay positive and break through the walls that you will face.”

Club President Chaddea Shoemaker said the No Place for Hate Club was born of her own experiences and that of others she has witnessed at MAHS. “We want to help make some changes that will make the Meyersdale Area School District a more positive and welcoming place for all students,” she explained.

Members of No Place for Hate meet each month to discuss ways that we can work on changing our own thoughts and actions, while also improving the culture for everyone here at school.