‘No Place for Hate’ at Canon-McMillan High School 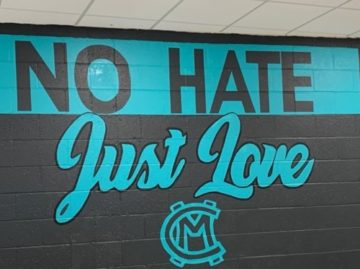 Canon-McMillan High School has been designated as a “No Place for Hate” (NPFH) school by the Anti-Defamation League (ADL), a program that celebrates diversity and fights bias, discrimination and bullying in schools.

Last year, during No Place for Hate week at the school, students constructed a “No Hate, Just Love” mural in the cafeteria that was signed by students, faculty and staff. See a time lapse video here. Activities designed to foster love and tolerance were planned and a donation was taken for the ADL – Victims of Hate Crimes.

The NPFH designation is also in part due to the efforts of teacher Meg Pankiewicz, who recently introduced a semester-long Holocaust literature class this fall for juniors and seniors. According to an article in the Observer-Reporter, the course covers the historical background of the Holocaust, the history of antisemitism, and the dangers of hate and complicit behavior. Students are studying nonfiction and fiction literature, Nazi propaganda, survivors’ memoirs and testimonials, film and photography.

Pankiewicz is uniquely qualified to teach such a course. She is certified as a master teacher of Holocaust studies and has a fellowship with the Holocaust Center. As part of her studies, she visited every death camp. More than a decade ago, Pankiewicz invited Holocaust survivor Sam Gottesman to speak with her class during a unit about genocide. The two remained friends until his death last year at age 95. She continues to share his story with her literature students.

In the article, Pankiewicz called the Holocaust “the greatest cautionary tale we have,” and said it’s important to teach lessons about such atrocities as the Holocaust and the Rwandan and Bosnian genocides to prevent them from happening again. She encourages students to realize the impact their choices and actions have on others, and “to live a more empathetic, open-minded life.”