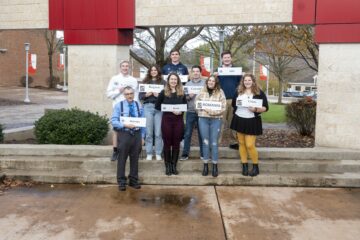 At least every school day, students part of Model UN at Bellefonte Area High School are working to prepare for the next conference. It comes with months of hard work, dedication and tapping into understanding the material at hand, so they can argue in support of the country they are assigned to. With some competitions already held this school year, the team is preparing for two more in April – a virtual one through the University of Toronto and an in-person event the following day at Pennsylvania College of Technology in Williamsport – both which they’ve competed at in the past, in addition to other conferences virtually and in-person in Boston, Erie, New York, Philadelphia and Ohio. These events are made a reality in part from a grant through the UN Association of Centre County, in addition to various fundraising efforts.

“Preparation is two-fold,” said Ed Fitzgerald, social studies teacher and Model UN faculty adviser. “They research the topic, so they understand the material and then have to research a country’s perspective on that material.”

Research includes learning about decisions countries have already made, topics and issues supported by respective countries, allies and adversaries of that country, and working on a mindset to form alliances at the conferences because the end goal is to have a peaceful resolution to world problems.

Model UN is a club that follows the framework and structure of the actual United Nations. In the club, students either choose or are assigned a country to represent. They then must argue from that country’s perspective on various topics depending on what committee they’re a part of. “You may end up being China in a human rights committee, so you have to suppress your beliefs to learn from that country’s perspective and argue from that perspective against other fellow high school students in similar situations,” Fitzgerald said as he was providing an example.

It also sometimes aligns with current events, which are often studied in social studies classes at school. “Educators cannot be shy on topics,” said Fitzgerald, who is also the social studies department chairman. “We’d be doing a disservice to our students by not acknowledging what they’re interested in and what’s going on around them. On behalf of the social studies department, we talk about all the different topics that are going on at the moment. Every one of us do a variation on current events, but a really good teacher will tie the events that are going on into whatever curriculum is because it makes it more real.”