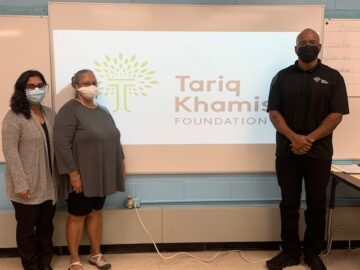 “I pledge on my honor to be a peacemaker in my school, in my home and community. I am a peacemaker.”

This is the pledge that Armstrong and Franklin D. Roosevelt (FDR) middle school students took at the end of the Peacemaker Assembly, led by the Tariq Khamisa Foundation (TKF). The assembly, held virtually for Armstrong on September 20 and in-person at FDR on September 22, told the TKF story about the consequences of violence when college student Tariq Khamisa was killed in 1995 by a 14-year-old gang member, Tony Hicks. Hicks was tried as an adult and sentenced to 25 years in prison. Recognizing both Khamisa and Hicks were victims in this tragedy, the families joined together to launch TKF.

Restorative practices include managing emotions, practicing mindfulness, making amends and forgiveness, building supportive relationships and practicing conflict resolution. These topics could not all be covered in the assembly, so the schools are also implementing TKF’s Restorative Workshop, a ten-session educational series, to dive deeper into social-emotional curriculum.

“I hope students learned that support is available to them and they are not alone in their trauma, pain and adversities,” said Tasreen Khamisa, executive director of the Tariq Khamisa Foundation.