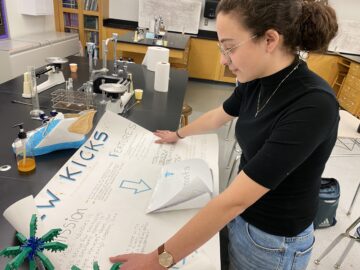 Quakertown Community School District middle school students are developing incredible STEM-related projects as part of a new program called Math Extensions. Used for the first time at Strayer Middle School and the Sixth Grade Center, accelerated math students are able to pick a project of their own choosing and, collaborating with one or more classmates, set goals for the project, document their work with a design notebook and blueprint, write a rubric to score their performance, and make a video.

“This is what this population of learners needs,” said Adam Smith, teacher on special assignment at Strayer. “They have the freedom to choose and say what they want to learn about. It’s a self-directed learning opportunity that they wouldn’t normally have access to. It empowers them to have more control over their learning in the classroom, and gives them a sense of ownership.”

An Extension Project Showcase open house was held on Monday, March 21 for parents and families to attend.

Math is a part of each project created, but STEM, language arts, science, social studies and a student’s creativity are also incorporated. Projects include:

Calculating spaceship trajectories: Use functions to model relationships between time and distance.
Creating a rollercoaster ride: Model real-world situations with nonlinear functions.
Crossing the Darien Gap: Use systems of linear equations to solve real-world problems.
Design your own skyscraper: Use transformations in architectural design.
Bridging the gap: Design and build a bridge that has a strength-to-weight ratio higher than 2,750 lb / g/lb.
Investigate DNA exonerations: Use linear equations to model real-world data.
Not So Bored Game: Create a board game incorporating mathematical ideas and concepts from the current school year in order to advance throughout the game.
Make’em Go!: Design and create a moving vehicle that moves without using electric power.
Fresh Kicks!: Design, engineer and build a prototype of a shoe an athlete would wear while competing.

“They are on task, and they know what their end goal is,” said Jacki Clymer, who teaches a Math Extension class and describes her job as taking more of a supportive role. “I’m enjoying the culture of the room. Everyone is trying to develop the best project. They’re the ones raising the bar.”

“It’s a really cool class,” said Eliana Galleo, an eighth-grader, and creator of Fresh Kicks!. “We have to think about the process from beginning to end. There’s a lot of planning involved.”

Math Extensions was designed by QCSD’s Office for Teaching and Learning. Strayer Assistant Principal Zach Garger, who played a key role in the development, explained that Extensions “is a vehicle to help students take charge of their learning and support middle school math achievement.”

Both Mr. Garger and Mr. Smith praised Chris Deily, the teacher leader for Extension training, for doing “a tremendous job of communicating, planning and supporting our teachers in getting this up and running.”

“We’ve placed a lot of demands on the Extension teachers, and they’ve really come through in a way I’m very appreciative of,” Mr. Smith said. “They’re having the students take risks, trying something new and learning in ways they might not be used to. It’s been a learning process for all of us, a great learning experience that will make future years more successful.”