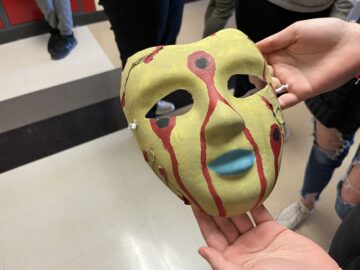 Students in Bellefonte Area High School English teacher Kat Momenzadeh’s class were wearing a different kind of mask than one would normally find around a school during a pandemic – ones created for a class project that tied into a novel they were reading.

Momenzadeh said the project was connected to author Chinua Achebe’s book, Things Fall Apart. In it, she said, “the tribal elders wear masks during judicial hearings that represent the spirits of the clan.”

Students were then tasked with figuring out how to represent the “spirit of Bellefonte” and depict it symbolically on a mask, Momenzadeh added.

Many were inspired through Bellefonte’s history with the railroad, iron mill system, underground railroad, airmail and pilot station, and the general Victorian architecture known throughout the area. Others took a nature approach that depicted the icons of Talleyrand Park with ducks, a bridge, trout and more; or mountainous terrain.

“They came up with really cool ideas this year,” Momenzadeh said. “I was super impressed.”

For sophomore Bailey Hoff, she learned about some of the alleged hauntings in Bellefonte. From that, she created a ghost-like mask that she explained was a little different from other ideas. Classmate Brady Wertz created a mask inspired by the borough’s use of electricity.

According to ExplorePAHistory.com, Thomas Edison licensed electric companies with Pennsylvania towns located near coal mines, including Bellefonte, where on February 4, 1884, local businessmen celebrated the arrival of electricity to the town with a banquet in the Bush Hotel, also known as the Bush House, where they ate under the lights of 13 electric lamps.

During the project, students conducted a gallery walk and presentation with teacher and peer reviews based on the mask’s depiction of Bellefonte, use of symbolism, creativity and functionally.