Marion-Walker students recognized at board meeting 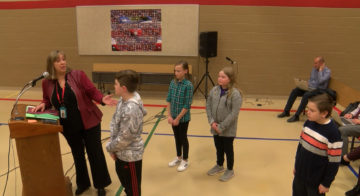 Students at Marion-Walker Elementary School helped a neighbor of the school check something off her bucket list after participating in what they called a Gettysburg Address project. Because of that, they were honored at a school board meeting on March 29 that highlighted more details of the project.

Principal Karen Krisch said it all started with a call from Chia In Rutkowski, 93, who lives near the Hublersburg-based school. Rutkowski is originally from China, and has lived in the United States for more than 75 years. She said that as a child, she learned about the Gettysburg Address while in China, and after the process of moving to the U.S. and gaining citizenship, the words continued to resonate with her. In fact, she can still recite the speech to this day.

That’s when she reached out to the school with an idea to hold a contest among students based on former President Abraham’s Lincoln’s speech during the Civil War on Nov. 19, 1863. Four students volunteered to recite the speech in a video project, which was shown to Rutkowski. Complementary lessons in class during Presidents Day week also allowed students to learn more about presidents and the Gettysburg Address. Money donated by Rutkowski was also put toward buying books for students, in addition to gifts for participating students in the contest. They were Kathryn Barefoot, Robbie Neff, Ronni Spotts and Landon Sykes.

Krisch said that when Rutkowski was briefed about the project, she responded, “This is now something I can check off my bucket list.”

“We’re so thankful she’s a great neighbor for us,” Krisch added.