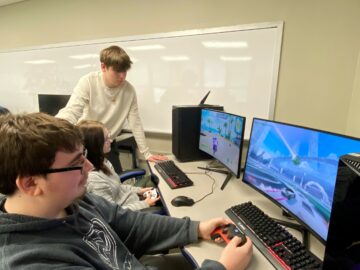 The National School Board Conference held in Philadelphia in 2019 provided information for Southeastern Greene School District Board member, Janet Pennington, to approach the administration and her fellow board members with the idea of starting an esports program at Mapletown High School. Esports, short for electronic sports, is a form of competition using video games. With 72% of students considering themselves gamers, competitive Esports teams are becoming part of the extracurricular landscape in many high schools and colleges. Many colleges are sponsoring Esports teams and offering scholarships with the student pursuing any major just as in traditional sports.

Mr. Scott Sinn, assistant to the superintendent and director of curriculum, met with students to gauge their interest and investigated the High School ESports League (HSEL). HSEL offers opportunities such as competition, available games and possible exposure for scholarships. The program was approved in June 2021, and Mr. Johnathan Gamon was hired as sponsor. Title IV funds were used to purchase gaming PCs, monitors and gaming chairs. The 11 students on the team compete in the games of: Valorant, Fortnite—After School Rumble, Rocket League and Chess.

Mr. Gamon created a Mapletown Esports YouTube channel that features interviews with players, gaming recaps, live streaming of games, and gaming tutorials. According to Mr. Sinn, Greene County is using grant money to create a countywide Esports league. Mr. Gamon has taken a leadership role with this opportunity by developing a countywide website for Esports. Looking ahead, he is planning a summer ESports camp. He plans on developing and constructing an onsite arena with digital access for fans. An Esports base class with curriculum aligned to the STEM initiatives is in the works. This course will focus on social-emotional learning, college and career readiness, and digital citizenship.