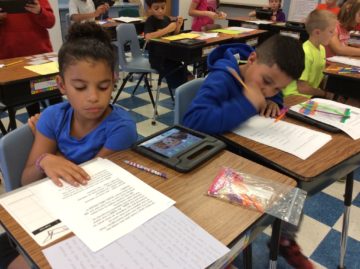 Fourth-grade students at Linntown Intermediate School are enhancing math skills while corresponding with some new pen pals. For the past three years, fourth-grade teacher Alaina Foresman has implemented the program in her class with the help of a group of aspiring educators from Bucknell University. At the start of the semester the college students met with students in Foresman’s class to interview them and decide which mathematical areas to focus on. They then mailed packets containing the math problems to the fourth-graders, who worked on the math and corresponded with their pen pals in a series of letter exchanges. The math problems deal with concepts the fourth-graders will learn later in the school year. In November, the students will meet together again at the university for a campus visit. Not only do the university students get insights into how the fourth-graders learn, but the younger students grow their social and math skills while participating in the innovative project.