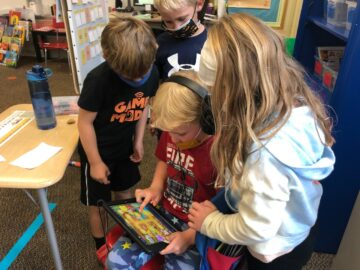 In addition to learning math concepts, Math Centers also allow children to develop skills that help them work together to solve problems.

It’s a little over a month into the school year, and even the kindergarteners have a strong grasp of classroom expectations. In teacher Tara Homer’s class at Ridge Park Elementary School (RP), the children were working at math stations during Math Workshop.

“They’re so fun,” said RP kindergartener Lena. “You always have something to play with, and you never run out.”

While students look at the math stations as play, the different centers around the room feature academic activities that help the children develop better number sense and counting skills. After reviewing a “Grab and Count” game as a group, students were assigned to different the stations, where they counted physical objects like pompoms and cubes, matched pictures with numbers in a puzzle, used the math application called DreamBox on an iPad, or worked in a small group with Mrs. Homer.

“I like numbers, and I like counting, because we can get better at counting,” added Logan, who is looking forward to learning how to count to 100.

In addition to practicing their numbers, Math Centers also give the kindergarteners a chance to develop skills that go along with establishing a routine, working with partners and working in small groups.