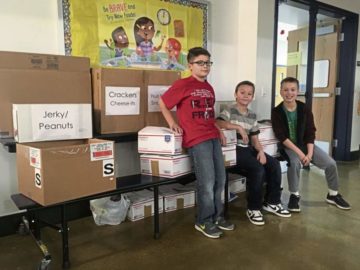 It’s not unusual for students at Kiski Area East Primary School in Vandergrift to spend the days before the holidays putting together care packages for troops deployed overseas. It is more unusual, according to fourth-grade teacher Shasta Bassett, for students to spend the holidays with a parent deployed overseas. So, when Bassett learned that student Logan Toy was without his dad for the holidays, she wanted to see what could be done to make things easier. Because the school has made packages for troops before, “we just figured it would be something nice to do for him and his platoon…to let them know we are thinking of them.” Jeffrey Toy has been deployed to Afghanistan since September, wife Gwen Toy said. Principal Patrick Marchand said all 490 students at the elementary school —  and not just the fourth grade — pitched in to help with the packages. “For the last couple of years we’ve tried to do something for the troops during the holidays,” he said. “The kids really try to think about other people. They are pretty in tune with people that are serving overseas and people serving the country and kind of want to help out.” Toy said he wasn’t just putting packages together for his dad, but for all of “the people that are in the Army that are far, far away serving.” Marchand, himself a veteran of the Persian Gulf War, said seeing the students work to bring holiday cheer to deployed troops is extraordinarily heartwarming.