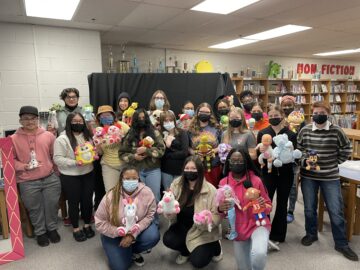 Key Club students with some of the stuffed animals being donated to the VVA.

Truman High School’s Key Club collected approximately 700 stuffed animals for Vietnam Veterans of America (VVA). VVA is an organization dedicated to veterans, and provides them and their families with items like toys, books and household products to give them comfort.

Each month, Truman’s Key Club comes up with a different project to put into action. Key Club is an international, student-led organization that provides service, builds character and develops leadership in its members. Teachers Christine Welsh and Catherine Lamplugh co-advise the club.

For the month of March, one of the students mentioned donating stuffed animals to children and veteran families in need and during emergencies. “Upon hearing about it, it instantly touched our hearts and we knew we just had to do it,” said Shayla Simmons, Key Club president.

The club voted on it and the idea won, so the students began making signs to advertise. Truman students were encouraged to donate gently-used stuffed animals to the cause from March 1-4.

“We learned how to organize a fundraiser in order to reach a goal that will help someone, as well as team work and compassion for others who are going through more difficult times,” said Elaina Kaess, Key Club vice president. “We are also learning to be grateful for what we have due to others around us not having the same opportunity as us.”

VVA picked up the stuffed animals on March 16 to distribute to veterans.

“We are thankful for everyone who helped us be able to reach our goals and make this drive happen,” said Simmons.