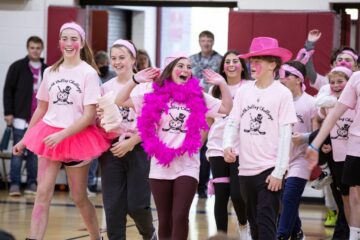 One of the 16 student teams is introduced at the kick-off assembly.

The Keith Valley Challenge was started in honor of Billy Whitehead, a Keith Valley Middle School student who died on his way to school in 1977 from a rare congenital heart condition. His friends decided that the best way to give back and turn this tragic event into something that could be positive was to hold a floor hockey marathon to fundraise in his honor. “Forty-seven years on, we continue that tradition of giving back and helping others. That’s what today is all about,” said Principal Jon Kircher during the Keith Valley Challenge’s kick-off assembly on October 28.

About 300 eighth grade students pledged to play games for the Keith Valley Challenge and raise money for the Make-A-Wish Foundation. Kircher reminded the students that they are playing these activities to raise money for students their age who can’t play due to life-threatening illnesses.

The assembly featured comments from the district’s Director of Education Dr. Sue King, State Representatives Nancy Guenst and Todd Stephens, and Senator Maria Collett, who presented a certificate of recognition to mark the Keith Valley Challenge’s 47th anniversary. Additionally, Cara Feldman, vice president of development for the Make-A-Wish Foundation’s Philadelphia, Delaware and Susquehanna Valley Chapter, presented a plaque to express her gratitude and appreciation of the event.

Hatboro-Horsham School District alumna Valerie Colantuono, Class of 2014, spoke about the impact of receiving a wish from Make-A-Wish Foundation. At 11 years old, Colantuono was diagnosed with severe aplastic anemia, which she described as a blood disease, bone marrow failure and an autoimmune disease. She could no longer attend school or see her friends, and treatment left her very weak. After being told she was eligible for Make-Wish, Colantuono could shift her attention from treatments to excitement, and she wished to take a trip to Atlantis in the Bahamas, where she had a memorable time with her family.

“The effects of a wish are very long lasting. Here I am, 15 years later standing up here and talking about how this experience affected me then, but also now, and I think that’s the most beautiful thing about Make-A-Wish,” said Colantuono. She now serves as a volunteer wish granter for Make-A-Wish Foundation and serves on its Young Professionals Board. To conclude her speech, she told the eighth graders, “Your hard work and fundraising directly helped kids like me who were going through a really hard time and will continue to do so much good for kids in the future.”

Wrapping up the assembly, eighth-grade Assistant Principal John Ewerth announced that the class raised $20,023 for Make-A-Wish Foundation, which is more than $1.1 million since the Challenge began in 1977. The Keith Valley Challenge commenced with students off to their first game of floor hockey, tennis baseball, soccer, kickball, volleyball, and other indoor and outdoor games. From 9:00 a.m. to 3:00 p.m., students played nonstop to help make the dreams of children come true.