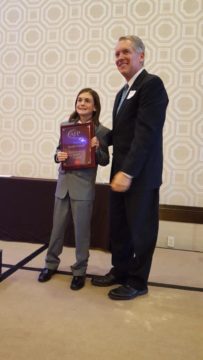 James W. Parker Middle School student Jacob Haugh was named Outstanding Youth Philanthropist of the Year by the Association of Fundraising Professionals Western PA Chapter. Jacob was honored at National Philanthropy Day in Pittsburgh in November. The Outstanding Youth in Philanthropy of the Year honors a young person or group of young people who have demonstrated exceptional generosity in support of a charitable cause or causes, demonstrated exceptional initiative and leadership in recruiting, coordinating and motivating volunteers to raise funds for a charitable cause or causes and encouraged other youth to make charitable gifts and volunteer their personal time to philanthropic causes. The sixth grader is closing in on $25,000 that he has raised over three seasons to benefit Prader-Willi Syndrome, a rare, complex genetic disorder. The disease affects an estimated 1 in 10,000 to 30,000 people, including the daughter of Pirates manager Clint Hurdle. Haugh’s initiatives have made him one of the largest individual donors to the program and were featured in a Root Sports Pittsburgh documentary-like-story.