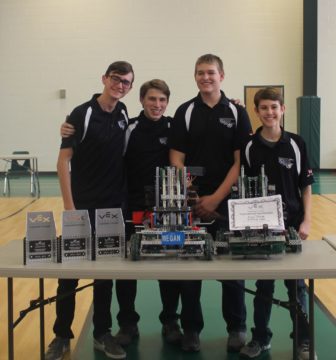 Two Jersey Shore Area High School VEX Robotics teams competed against 24 other teams at the Western PA State Championship Robotics Tournament in March. Team 3701-B came in 18th overall and eighth in the state in the tournament team competition. Team 3701-A placed second in individual skills and programming challenges, fifth overall in random team competition and first in the state in tournament team competition. As first in the state, this team, and six others from across PA, will advance to the World Competition in April in Kentucky. The VEX Robotics programs encourages students to use STEM skills to design and build robots that can compete against others in game-based engineering challenges. According to an article in Williamsport Sun Gazette, teams must keep engineering journals, create technical drawings by hand and on the computer, and show mathematical computations for power consumption, gear ratio and mechanical support, and they are judged on these in addition to their robot’s performance.