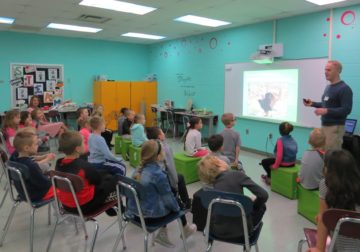 A first-grade teacher at Jefferson Elementary introduced a special science unit combining the study of eagles with solar energy. The class had been studying the Hays eagle nest via a website maintained by the PixController company that installed the camera and solar panels powering the nest camera. To reinforce classroom studies, teacher Mrs. McCullough reached out to Bill Powers, PixController founder and CEO. Powers visited the first-graders in March to learn about their projects and to speak about his eagle camera technology. The students were amazed to see all the many different species of wildlife footage captured by the PixCams. Mr. Powers’ company has 17 streaming cameras that must be continually monitored for battery power, video streaming and security. The camera system is a unique system that is custom designed and manufactured by PixController, Inc., and streams over cellular network, powered by 360 watts of solar panels. Mrs. McCullough and her students showed Mr. Powers the mini windmills that they worked on with fourth-grade students. Funded through Tom’s of Maine and an independent donor, 12 mini windmills and solar panels were purchased for a multidisciplinary project engaging first-  and fourth-grade students. Mr. Powers was so impressed with Mrs. McCullough’s students and the innovative, hands-on learning taking place in the classroom that he would like to engage the class in a Golden Eagle Research Project next year.