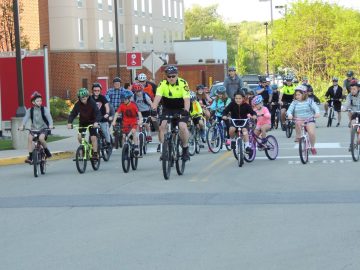 The event promotes bicycle safety, the many health and fitness benefits of bicycling, and environmental advantages of bicycling instead of driving to local destinations. Of course, it also promotes a friendly competition between the district’s two 4th & 5th grade elementary schools. Whichever school has the most participants gets to keep the traveling trophy. This year’s winner was Horace Mann Elementary School.

Each year the event is held “rain or shine.” Riders this year were especially grateful for the latter and are already “gearing up” for next year’s challenge!