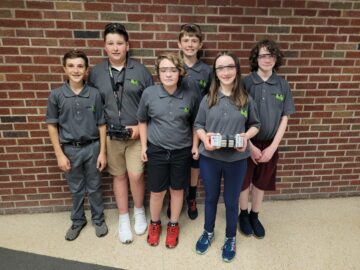 Eventual Grand Champions getting ready to head into the tournament

The competition involved not only the actual combat tournament, which Indiana’s Team Viper won in double elimination play, but also judging for each team’s documentation portfolio, for which Team Magnum scored highest. The grand champion was the team that emerged with the highest score from both the bracket competition and the portfolio judging.

The final event was the “King of the Arena” contest, the award for which recognized the team whose combat bot emerged victorious when all bots battled in the arena at once. Team Viper earned bragging rights for that event.

“Watching the students’ excitement and determination throughout the competition is inspiring. The ability of these middle schoolers to take their robots and fix them in between competitions and then come back to battle again … it’s a testament to their grit and tenacity and their teachers who support them. Not to mention all the work that went into getting to the competition!” said Stephanie Keppich, a Team Viper parent.

The competition was streamed on YouTube and was well attended by families, invited guests and students. The event’s organizers, Scott Herrington and Michael Dolges, pointed out that many high schools and universities have battle/combat bots competitions and were proud of their students for completing high school level work. “What these 11-13 year old kids have done this year up to and including this competition is truly remarkable. We could not be more proud of our kids,” Herrington said after the competition.

These teachers’ hope is that this will foster a love for learning science, technology and math at an early age and increase students’ understanding of career paths. Dolges and Herrington also look forward to partnering with other area schools to get more students involved.

“Today was a tremendous learning experience for our students. It was great to see their excitement and enthusiasm on display at this culminating event. The students have worked so hard the entire school year, and I could not be more proud of what they accomplished. We hope next year’s event is even bigger and better,” said Dolges.

The event was made possible with funding by Martin’s and S&T Bank. Technical support for the CNC-machined weapon was provided by Indiana County Technology Center.