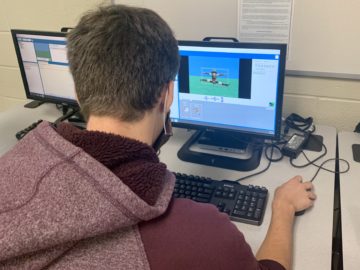 Just like humans speak different languages, communication can also happen with different languages on a computer. Those languages have multiple functions and may accomplish different tasks. And one of the goals in Bellefonte Area High School teacher Elizabeth Devinney’s computer science classes is to provide students with that logic.

It starts with a class called Introduction to Computer Programming – a semester-long elective that allows students to learn the basics of computer programming through an application called Alice. It also helps build the foundation of how to communicate and sequence. Students can then take Introduction to Java and AP computer science classes that provide a higher level of logic and math-based coding and programming knowledge and skills.

But on September 24, about 12 students in Devinney’s second-period intro to computer programming class were using Alice software to help make animated objects into stories and cartoons.

“We use a language written by Carnegie Mellon (University) that is designed to be fun and easy,” Devinney said.

Through a “drag and drop” process, students can pick an alternate virtual universe where they may add items into their digital worlds. Mostly, it’s about creating cartoons with a mission to provide those objects with instruction.

For junior Danny Musset, he was working with the program that allowed him to create samurais. The goal, he said, was to follow a storyline in a textbook to make the animated characters complete missions by using a coding process. In his assignment, Mussett was tasked with creating two samurais that must’ve performed four different tasks.

“It’s cool because you get more advanced as you go along,” he said.

So far, many students said their favorite part about the class is being able to better understand how to communicate with a computer.