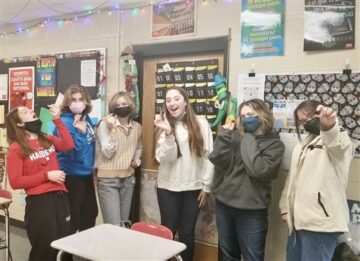 In Spain, a number of traditions are celebrated to commemorate the new year, El Año Nuevo. One tradition includes eating 12 grapes, along with 12 chimes of the clock at midnight on New Year’s Eve into the new year, called La Nochevieja. The tradition is carried out to symbolize and invite good luck in the new year.

In addition to learning about the holiday and its traditions, Spanish classes at Bellefonte Area High School were given the opportunity to actively participate in a rendition of this observation. The students viewed portions of televised New Year’s celebrations in Spain and ate their own grapes. In this activity, Spanish students also learned new vocabulary and other information, as well as viewed and experienced an aspect of Hispanic culture and tradition.