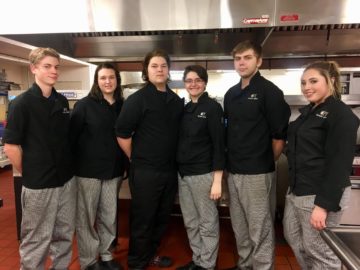 Secondary students in the Culinary Arts program at Central Pennsylvania Institute of Science and Technology are preparing for a ProStart competition that tests their knowledge, creativity and passion for the food industry. ProStart is a global initiative and competition that features the foundations of restaurant management and culinary arts. On Jan. 13, the group of students attended a culinary boot camp in Punxsutawney to help get them better acquainted with the culinary and management process, and better hone their skills in areas such as professionalism, teamwork, food production, recipe costing, knife skills and more. A final ProStart competition will be held Feb. 23 at the Penn Stater Hotel and Conference Center in State College that allows teams to be judged based on written proposals, verbal presentations, designs and more. The event is sponsored by the Pennsylvania Restaurant and Lodging Association.

CPI students are split into two teams. Members of the culinary team are: Shia Miller, Jarren Pross, Grace Reese, Haley Reese and Devin Spaulding. Members of the management team are: Emily Hagenbuch, Deborah Neal, Kyra Wolfhope and Nicholas Zink. “This is our first year,” Culinary Arts Instructor Chef Tim Beckenbaugh said. “We just started the ProStart curriculum, and so there is a competition element, and I said, ‘Hey, you guys want to watch? You guys want to compete?’ and they were like, ‘Let’s go compete!’ We are anticipating we are going to learn a lot at the boot camp.”

For the culinary team, they must prepare a three-course meal using items native to the region they represent. For CPI students, that’s central Pennsylvania. Some ingredients they’re considering using are elk, venison, pheasant and trout, but haven’t yet established the entree and other dishes. The management team must separately establish a restaurant and marketing plan to feature at the competition. The team has two ideas so far: a general brick-and mortar restaurant, and a food truck. The teams submitted a rough draft of their plan to judges earlier in February who then provided feedback to help students tweak their proposals.