Learning about Berlin Wall through ‘Escape the East’ 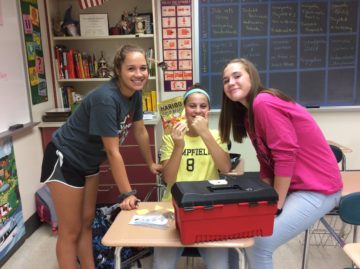 Students display their prize after completing the ‘Escape the East’ challenge.

On November 2, the Hempfield High School German Club conducted a “Breakout Box” activity as a way to learn about former East Germany and the fall of the Berlin Wall, which fell Nov. 9, 1989. Students were divided into seven groups and were given the task of unlocking six locks in order to ‘Escape the East.’ Each lock came with a riddle or fact about East Germany, with prizes for opening all six locks, including German chocolate and gummi bears. The students had a great learning experience, and the German teachers plan to use the Breakout Boxes in their classes again.