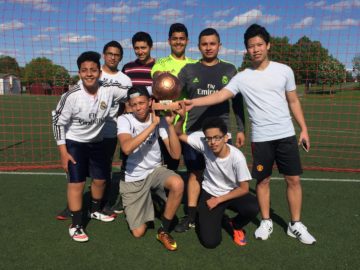 Members of the “One Heart” team display their trophy.

For the past several years, the Hempfield High School German Club has organized a multicultural soccer tournament as a form of friendly competition among world language clubs and English as a Second Language (ESL) students. About 40 students participated in the tournament this year with representatives from the French, Chinese, and German clubs and ESL program. This year, the ESL student team walked away victorious. For their efforts, each team member received German and Chinese treats, as well as a homemade trophy that will be housed in ESL Department Chair, Mrs. Donna Goserud’s classroom until next year’s tournament. When asked for a team name to inscribe on the trophy, the students had a brief discussion and then settled on, “One Heart.”