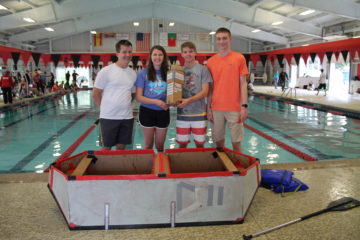 Hempfield Rec Center played host to Hempfield High School physics students in early May, who gathered to compete at the Annual Benner Cup cardboard boat race. The project is both a tradition and a physics class requirement. Students must build boats to hold the weight of two teammates and withstand the water, earning a grade — and a good laugh. Competing students, worked from six to 60 hours, collecting cardboard, drawing up blueprints and building boats. Boats must no more than 10’x10’, and be made out of cardboard with 3/16-inch thickness. Students take pride in sharing how much duct tape and wax went into supporting their creations. The assignment is based on competitive grading, which means that the further students get in the competition the better grade they will receive, but drawings and construction also are taken into consideration. After preliminary heats, the fastest times move into the semifinal bracket. Then the three fastest semifinal winners race for possession of the cherished Cardboard Cup. Juniors Christian Benedict, Emily Rahe, and Mark Reth claimed this year’s title.