Envirothon students hike away with first and second place 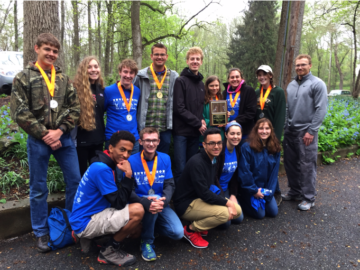 Members of the Hempfield Environmental Club, along with their advisor, took part in the Lancaster County Envirothon.

Members of the Hempfield High School Environmental Club participated in the Lancaster Co. Envirothon in late April. Eight districts and 22 teams competed in the event, which consisted of six stations through which teams rotate and are assessed on topics including ecology, aquatics, wildlife and forestry. Of Hempfield’s three teams (13 students), two teams finished in first and second place, separated only by a single point, the first time in the history of the event that Hempfield has come away as the overall winner. The yearly event has been hosted by the Lancaster Conservation District dating back to 1984. As a result, the Hempfield Environmental Club sent five members to the state competition held in Pittsburgh in May.