Handcrafted and from the heart 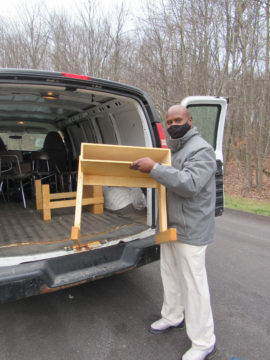 Twelve Seneca Valley students are getting the best kind of gift — one that comes from the heart and the kindness of two retirees. Two local residents reached out to the district in October offering to make a dozen handcrafted desks for students who may not have the proper workspace at home to do virtual work or cyber school. The amateur woodworkers were inspired by a story that aired on the evening news and learned how to make the desks from a video they found online. They handcrafted each desk and donated them to disadvantaged families in the district.

“So far we have 10 students confirmed,” said Seneca Valley Academy of Choice Assistant Principal Ashley Porter. “I will also be getting another two students which will equal the dozen that they originally quoted.”

The white birch joinery desks were stained and stand at 24, 26 or 28 inches tall. Porter and Seneca Valley’s buildings and grounds department delivered the desks to students last week.

“We took great pride in squaring each angle, assuring the desks were completely level,” stated the one anonymous donor. “We hope these desks will provide some children with a comfortable, private workspace in their home for schoolwork.”