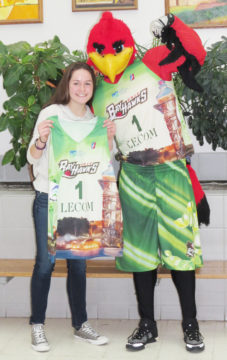 An NBA Development League affiliate of the Orlando Magic wore a uniform designed by General McLane High School sophomore Kaley Berger, winner of the BayHawks first-ever uniform design contest. The contest, a collaboration between the Erie BayHawks, Erie Arts & Culture and Green Mountain Energy, called on artists, designers and photographers of all ages to submit a design that celebrates a “Greener Erie.” The design needed to incorporate recognizable elements of Erie, along with a depiction of what energy conservation and environmental sustainability mean in today’s age. Berger’s uniform design features her depiction of Erie’s Bicentennial Tower and the lakefront. The uniforms were worn by the BayHawks during their game against the Raptors 905 on Saturday, March 25, and were also auctioned off during the game. Berger received a special uniform with her name on it. General McLane freshman Ellen Eisert placed second and high school teacher Karen Hodas placed third in the contest. Students created their designs in Mrs. Hodas’ graphic design class.