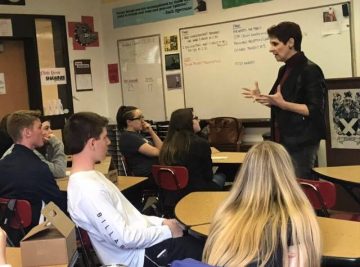 Students listen to Gina Catanzarite, a visiting professional journalist, as part of the “FHS Meets the Press” speaker series.

Freedom Area High School students on the staff of the FHS Press school newspaper are celebrating a second-place win in the American Scholastic Press Association’s annual newspaper contest/review, in the category for schools with 500 students or fewer. The paper is no stranger to awards, having won first place in the Scholastic Newspaper Awards and the American Scholastic competition several years in a row. The 25 students who make up the staff benefit from the “FHS Meets the Press” speaker series, which brings a professional journalist to the high school to speak and take students’ questions. Past speakers have included Amy Jo Brown, a co-founder of War Streets Media, an independent news organization in Pittsburgh, and Gina Catanzarite, an Emmy-award winning producer, broadcast journalist and adjunct professor at Point Park University.