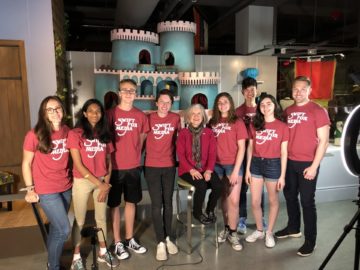 What began in April 2019 as a voluntary book study of Maxwell King’s The Good Neighbor: The Life and Work of Fred Rogers, became a 70-minute documentary on the life of a remarkable man, produced entirely by Fox Chapel Area High School students.

Students in teacher Ryan Devlin’s digital media production course have released their documentary, “Our Assignment from Fred Rogers.”  The documentary, which took more than a year to make, includes interviews from many people who were close with Rogers, including his wife, Joanne, as well as “Mr. Rogers’ Neighborhood” producers Hedda Sharapan and Margy Whitmer.  Also included in the documentary are interviews with King, Mr. Rogers’ biographer, and David Newell who played Mr. McFeely on the long-running children’s television show.  Three of the interviews were filmed in front of the original Neighborhood of Make-Believe set pieces displayed at the Heinz History Center, and students were responsible for all elements of the production.

Originally, once the students had completed a few interviews, they planned to release them, but, an unexpected telephone call from Roger’s widow, Joanne, changed the direction of the entire project.  When she heard about it from her plumber, she called one of the Fox Chapel Area High School students in the group and then invited them to her home in Pittsburgh for a truly memorable interview.

According to Lance, one of the most inspiring things he learned while working on the documentary was the importance of taking time to really listen to others and to make interactions with people special, which is just what Rogers would have wanted.

“Fred Rogers made a constant effort to be the kind and caring individual that everyone who watched his program knew him to be, which is the most inspiring aspect of his life that I had the opportunity to observe in working on this project,” Lance says. “The idea that anyone can strive to be the best version of themselves in how they interact with others is one of the more hopeful messages that is touched on in the lessons of Fred Rogers.”

Lance also learned that making a documentary takes a great deal of time and effort, but that is what must be done to create a compelling and meaningful program for the audience. He also commented that working on the project opened his eyes to exactly how genuine Rogers truly was.

“One of the most remarkable things about Fred Rogers is that when he was on his program, he wasn’t playing a character. Fred Rogers was exactly the person who he was on television. That aspect of honesty in his life shows what a truly caring and loving person he strived to be.”

“Our Assignment from Fred Rogers” was inspired by a quote from Rogers that reads, “Try your best to make goodness attractive. That’s one of the toughest assignments you’ll ever be given.” The full documentary is now available to watch on the Swift Fox Media YouTube channel which can be found online at https://youtu.be/0ijzTmatpdM.