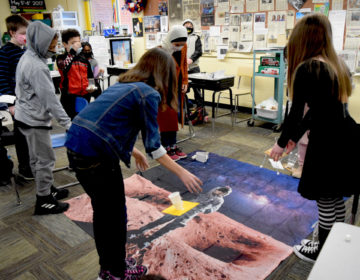 In the weeks leading up to the successful landing of the NASA rover, Perseverance, on Mars, fifth graders at Carnegie Elementary explored, researched and developed their own space rovers in the classroom and then launched them on a simulated surface of the red planet.

As part of a multi-tiered assignment, students were challenged to design a shock-absorbing system that would contain and protect two “astronauts,” or marshmallows, when the crafts landed or were dropped from a standing position to a hard surface. Students used materials such as paper cups, plastic straws, tape, index cards and stiff paper to design the rovers. Launch day was held on February 16 as students attempted to safely land their space crafts.

While students counted down the days to landing of Perseverance on Mars, they read articles about space, science and technology, created a Mars Lander video game using Scratch Studio, studied all aspects of the red planet, prepared a written narrative and participated in a crater modeling activity. The assignment covered all components of the fifth grade curriculum: math, technology, science, English/language arts and even social studies as the youngsters studied the history of past NASA space expeditions.

The STEM project is a close to the heart of science teacher Scott Donnelly, who attended the NASA Honeywell Space Camp for Educators in 2017.

The nearly seven-month journey of Perseverance, spanning some 300 million miles, was the first time in 10 years for a U.S. rover to touch down on the planet. Perseverance weighs a little more than 1 ton and reached the atmosphere of Mars at a speed of 12,000 miles per hour. The rover’s landing on the planet was decelerated when the craft deployed a parachute that slowly lowered it into Jezero Crater, a 28-mile-wide basin that researchers believe was once filled with water.