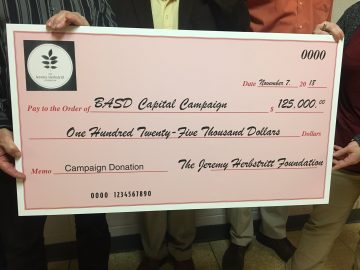 It’s fitting that the day after Jeremy Herbstritt would have turned 39 years old, his father Mike Herbstritt presented the Bellefonte Area school board on Nov. 7 with a $125,000 check for the capital campaign that will partially fund construction and renovations to the Rogers Stadium complex at the high school, which will include a state-of-the-art track.

When asking Mike Herbstritt what his son’s best event was, he said, “just the joy of running.” “When he got into running, he loved it,” Herbstritt said, and with a laugh continued the story. “One of the things he liked to do to me was challenge me to run with him and wear me out.” And then he reminisced of the time his son was at Penn State admiring the university’s track. “He said, ‘wouldn’t it be nice if Bellefonte had a track like this?’ And I didn’t know what to say to him; he was just a student, and here we are doing this now in his memory,” Mike Herbstritt said.

On the day of the mass shooting, Herbstritt was scheduled to be in Boston to see his sister Jennifer Herbstritt run in the Boston marathon, but decided to stay in Blacksburg, Va. on campus to complete school work. “We were all in Boston rooting her on and Jeremy had called me a week before — he was supposed to go with us – and he said, ‘dad, is it ok to stay and do school work?’ and I said, ‘yeah, that’s your priority. I think you should stay there and we’ll go to Boston’,” Mike Herbstritt said. “I still regret saying that.”

The first phase of the project includes the demolition of the former field, buildings and seating area; and then pavement of the track and other track and field amenities; and installation of bleacher seating and artificial turf field. The second year of construction and renovations, slated to be completed in time for the 2019 football season, will include the installation of the track’s surface; and concession stands, team locker rooms, field house and more.

“They (the school board) worked on this project for 11 years trying to get it going, and this year, I don’t what they did, but it was like magic,” Mike Herbstritt said.