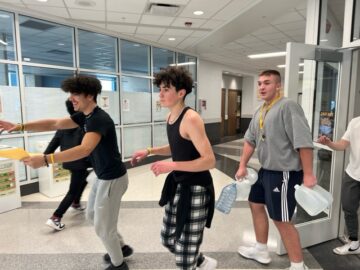 Running typically isn’t allowed in the hallways of Thomas Jefferson High School (TJ) or in most buildings. But, on February 2, small groups of students in TJ’s Environmental Science class were racing through the hallways carrying gallon jugs of water to help them better understand the lack of safe drinking water in developing countries.

All of the nearly 100 students in Nicole Cook’s Environmental Science classes recently read the book, A Long Walk To Water, by Linda Sue Park. From the book’s jacket, it’s a story about Nya, who walks eight hours every day to a pond to get water for her family, and Salva, who “walks away from his war-torn village. Salva is a ‘lost boy’ refugee, destined to cover Africa on foot, searching for his family and safety.”

After studying the global water crisis and the lack of clean, safe water in developing countries, the class participated in an “Amazing Race for Water.” Students were given clues to five locations around the high school where they had to answer a question on a fact they learned in class about the lack of safe water. At each location, the students received a gallon of water, for a total of five gallons, to simulate the average amount of water women and children typically carry on a daily basis in developing nations.

Mrs. Cook’s Environmental Science students learned about what the effects are on people who don’t have access to clean drinking water and sanitation, including doing a water calculator lab to see how much water we use directly in our homes and indirectly through the products we buy, the food we eat and the electricity we use.

The TJ students also learned these facts related to the global water crisis in the Environmental Science class: