Donations benefit students during the winter 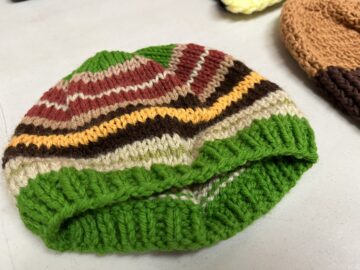 Outside temperatures in the area often dip below freezing, particularly in the winter months when it’s encouraged to bundle up and keep warm. But sometimes students from Bellefonte Elementary School come and go in those conditions without winter accessories such as hats and gloves.

Health room assistant January Zimmerman said she sees it firsthand, which is why she works throughout the year collecting donations from community members and organizations that benefit students.

“One little boy came in from the bus almost in tears rubbing his hands,” she said. “I asked him if he would like some gloves and he came up later in the day to pick (them) up.”

This school year, Zimmerman helped spearhead a collection drive that included free winterwear for students. A table is found in the hallway near the entrance that says “free” with many items.

The first donations came before winter break with gloves donated by St. John’s United Church of Christ. A country club then donated some gloves and hats, as well.

Former main office secretary and attendance clerk Dawn Yates also worked with a woman from the community who makes hats and who donated some in December. And most recently, more donations were also made from the YMCA of Centre County that included winter jackets, in addition to the other accessories.

“I have people in the community who will also give me a bag of hats or gloves that they have picked up through sales and such,” Zimmerman said. “So, the gloves and hats really come from a variety of places and I always want to get them into the children’s hands.”

Zimmerman added that when the donations are put out, the items are taken quickly, which she said is much appreciated since something so simple has such a profound positive effect on those at the school.